To share your memory on the wall of Bonnie Terrell, sign in using one of the following options:

Bonnie was born in Vian on Thursday, September 10th, 1936 the daughter of Elmer McConnell and Bertha (Noel) McConnell. In May of 1954, Bonnie married ... Read More
Bonnie Terrell, age 84, of Webbers Falls, passed away Monday, July 12th, 2021 in Vian.

Bonnie was born in Vian on Thursday, September 10th, 1936 the daughter of Elmer McConnell and Bertha (Noel) McConnell. In May of 1954, Bonnie married the love of her life, Milo Terrell. After Milo passed away in August of 1976, Bonnie raised their seven children. She was a caregiver, famous for her pies and a cook at Biscuit Hill. Due to always having an open door and willing to help anyone. Bonnie was loved by many, which to this day affectionately call her "Mama Terrell." She helped raise many of her grandchildren and loved to watch them in all their accomplishments. Above all family was the most important thing in her life.

Funeral services will be held at 1:00 pm Thursday, July 15th, 2021 at the Agent Millsap Event Center in Gore with Bro. Kenneth Byrd officiating. Interment will follow in the Stevenson Cemetery in Gore, OK under the direction of Lescher-Millsap Funeral Home.

To send flowers to the family or plant a tree in memory of Bonnie Fay Terrell, please visit our Heartfelt Sympathies Store.

Receive notifications about information and event scheduling for Bonnie

We encourage you to share your most beloved memories of Bonnie here, so that the family and other loved ones can always see it. You can upload cherished photographs, or share your favorite stories, and can even comment on those shared by others.

Love Jordan Charlee Jeter Liston and Carter, Ajinomoto Finance Team, and other have sent flowers to the family of Bonnie Fay Terrell.
Show you care by sending flowers

Christopher and Casey Snodgress purchased flowers and planted a memorial tree for the family of Bonnie Terrell. Send Flowers 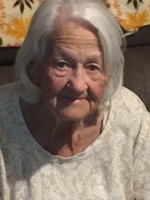